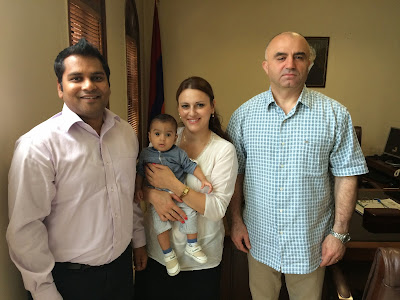 Indo-Armenian Friendship NGO (IAF) co-founders Mr. Rananjay Anand and Mrs. Ruzanna Ashughyan Anand met Hon. Ambassador designate Mr. Armen Martirosyan at the Embassy of Armenia in New Delhi on 21st May. Both of them  congratulated Amb. Martirosyan for his new responsibility as Hon. Ambassador of Armenia to India and exchanged warm greetings.

It was an introductory "Focus Meeting" about IAF's cooperation with Embassy of Armenia in India. During their meeting, which lasted approx. one hour, IAF co-founders introduced IAF and its activities so far in Armenia and in India to Mr. Ambassador designate and shared their future plans in respective countries. They emphasized the need of being more active in India in close cooperation with Embassy of Armenia through different activities which are considered to be a long due. Amb. Armen Martirosyan welcomed the initiatives taken by IAF and assured team IAF to work together with full cooperation from Embassy of Armenia. Lots of relevant issues were touched upon from People-to-People (P2P) connection to Business-to-Business (B2B) connection in order to prioritize the list of activities in near future.

Both parties agreed to work in close cooperation in future by involving the existing Indo-Armenian community and other relevant stakeholders in India. IAF is sincerely hopeful to see lots of activities about Armenia in India in near future.

IAF would like to extend heartiest congratulations to Mr. Armen Martirosyan on being appointed as Hon. Ambassador of Republic of Armenia to India and also wishes him a very fruitful and defining tenure in India!
Posted by IAF at 16:19 No comments: