Armenian-Indian Center for Excellence in ICT

On November 7, the Prime Minister of Armenia Tigran Sargsyan and Minister of Communications and Information Technologies of India Sachin Pilot attended the inauguration ceremony of Armenian-Indian Center of Excellence on Information and Communication Technologies at Yerevan State University.
The center is founded on the Intergovernmental Memorandum of Understanding signed between the governments of the respected countries on June 26, 2009 and was implemented by Incubator Enterprise Foundation (Armenia) and Center for Development of Advanced Computing (C-DAC, India) with assistance of World Bank Armenia office.
The ceremony was attended by the Prime Minister and Minister of Economy, Ambassador of India to Armenia Mr Achmal Kumar Malhotra, Ambassador of Armenia to India Mr Ara Hakobyan and other high ranked officials.
The opening ceremony started with traditional Indian lamp lighting by the Prime Minister Tigran Sargsyan and Minister Sachin Pilot and followed by the presentation of the center by Mr Pilot.
In his speech the Prime Minister Tigran Sargsyan stressed the importance of the center not only for Armenia, but for the region as well mainly because the center is equipped with advanced computer equipments including PARAM supercomputer, the only one in the region. This will certainly contribute to the development of industry in Armenia, to conduct research programs and train specialists. 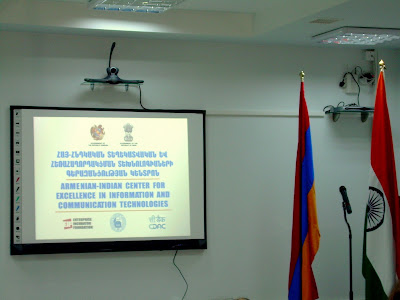 In his speech Mr Sachin Pilot said the opening of the center is a vivid proof of the Armenian-Indian cooperation. India is one of the leaders in IT sector providing 2 million jobs in India, which proves that India has a very strong experience to share with Armenian partners contributing to the rapid development of Armenian industry and even to seismic and weather forecasts.
Over 60 professionals from Armenia have already completed trainings in India. The center will hold trainings for minimum 1000 professionals every year The Center will also join Armcluster-the biggest computer network of the region. For the opening of the center India invested 1 million 800.000 dollars.
The key objectives of the center are:Delivery of IT training, training of trainers, exchange programmes, promotion of research projects.
More information about the center you can find on their official website here.
IAF also showed its presence at the opening ceremony. Two of IAF executive team members, Secretary General Ms Lusine Toroyan and Ms. Sona Ashughyan attended the ceremony and discussed with the officials the implications of the center for Armenia and its youth. Indeed it's one of the best collaborative initiatives by the respective Govts. to cement the bilateral ties, based on knowledge & Technology sharing.


IAF congratulates both parties for such accomplishment. Hope to see more Indo-Armenian collaborations in future which correspond to the great historical Indo-Armenian relation.