Armenian golfer in rendezvous with India-Armenia Friendship in India 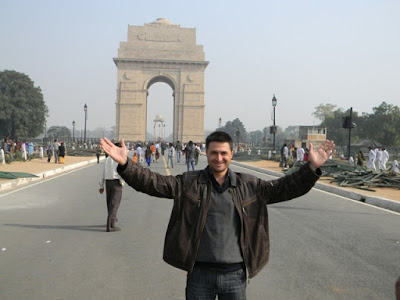 In its series of establishing people-to-people connection, India-Armenia Friendship, participated in a goodwill program to encourage Sports connection between these two countries. Mr. Karen Hovhannisyan, an avid Golf Player from Yerevan, representing Golf Federation of Armenia was invited by his Indian counterparts to participate in Sixth Chandigarh Golfing tour for NRIs (Non-Resident Indians) to be held between 16th-20th December 2010 in Chandigarh, India. Although Karen is not NRI, but he was invited to connect Armenian Golf with India in order to explore and emulate the design of the golf courses and the golf range in India. He was one of the two specially invited foreign Golf players. Another was from Spain. Indian Ambassador to Armenia Mr. Achal Kumar Malhotra was mainly instrumental to orchestrate this initiative.
However apart from this Golf-game, what Karen cherished more was two unforgettable days spent with IAF members. Mr. Rananjay Anand, Founder of IAF and Manu Singh, advisory group member, received Mr. Karen in New Delhi for two-days rendezvous. They were later joined by other IAF members Mrityunjay Anand, Asheesh Kumar, Vir Sanatan and Karen Mkrtschyan, who especially came from Kolkata to New Delhi to extend the homely feeling to Karen Hovhannisyan. 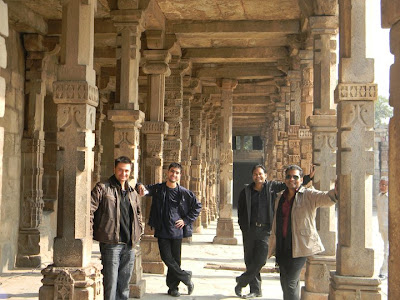 There was a Full day Delhi sight-seeing for Karen arranged by India-Armenia Foundation. Rananjay led the tour from front and showed Karen lovely historical sites in Delhi, including Qutab Minar and Lotus Temple. They had a great shopping cum fun time at famous Dilli Haat. Karen also did shopping at Janpath market in order to buy Indian souvenirs for his loved ones back in Yerevan. In the evening they had a small party at the house of Rananjay Anand where they recollected their time spent together.
During this period Rananjay and Karen also discussed different possibilities for bringing more people closer by initiating different sports planning. Cricket was among others, which they discussed to introduce to Armenia in later stages. 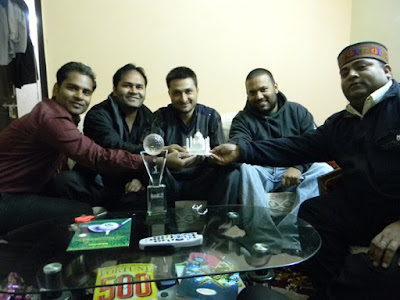 At the end, Karen was given a present from the team of IAF, as a token of goodwill. When Karen was asked how he felt about these two days, his reply was full of nostalgia. In his words: “I enjoyed the time spent in India everywhere. I made new friends during my Golf tournament and they extended me a very good hospitality. However these two days spent with IAF members are beyond words. I never felt, that I came away from my home country. It was like I’m with my family members. The way you all extended me your warmth, the way you hard-bargained for me for my all purchases, I felt you were never away from me. I can’t forget this all and it will be always in my memory forever. I can see now how India-Armenia relationship is being cared by most appropriate hands. Long live our friendship.”
After this party, Karen was escorted by Rananjay and Manu to Indira Gandhi International Airport, T3 to finally see him off. It was indeed though small step, but with a larger meaning for people-to-people connection between India and Armenia.
Posted by IAF at 11:57 No comments:

Starting the new year with a new blog

IAF was started in October 2009 as a FB group, just 2 months before Jan 2010. So we may consider 2010 as our action-oriented year. For IAF, indeed this year was full of activities and achievements. Though small, but a big step into our celebrating future. In this one year itself we have almost touched the 1000 mark of solidarity, which is the proof of our cherished togetherness and love for this cause. This togetherness was all seen during the event "Indian Cultural Night" held on 13th November in Yerevan in the celebration of Diwali. The festival of lights and togetherness brought the same spirit among people from both of these countries. My heartiest thanks to all those students of YSMU, who made it unforgettable with their excellent organizational skills. We would love to see it again and again and IAF will leave no stone unturned to make it even on bigger scale for the coming years.
In its series of establishing people-to-people connection, India-Armenia Friendship, participated in a goodwill program to encourage Sports connection between these two countries. Mr. Karen Hovhannisyan, an avid Golf Player from Yerevan, representing Golf Federation of Armenia was invited by his Indian counterparts to participate in Sixth Chandigarh Golfing tour for NRIs (Non-Resident Indians) to be held between 17th19th December 2010 in Chandigarh, India.  However apart from this Golf-game, what Karen cherished more was two unforgettable days spent with IAF members.
IAF as concept is now taking a bigger leap further in the next year to give it an organizational format, so that we transform ourselves from a virtual to Foundational platform.
We have also worked upon certain issues which will ease out the people-2-people connection between these two countries without any obstacles. In near future, you will witness all this which will narrow the technical/bureaucratic distance between us.
This is just a beginning, which envisions the greatest ever India-Armenia relationship.
Last but not the least. IAF would have never been in action without the devoted dedication of its members and volunteers from both countries. We thanks all of them and invite to this new blog to share new ideas and to build a new stage  of our great Indo-Armenian relationship.
Posted by IAF at 10:37 No comments: