It has become an annual tradition for the Indians living and studying in Armenia to celebrate Diwali with their Armenian friends. On 13 November 2010, Yerevan hosted another great event called Indian Cultural Night 2010. It was organized by Indian students of Yerevan State Medical University and was supported by a Facebook based group INDIA-ARMENIA FRIENDSHIP
It was indeed a great opportunity to see the fusion of two great cultures scintillating together. Diwali, “the festival of lights”, is an important five-day festival in India, occurring between mid-October and mid-November. For Hindus, Diwali is the most important festival of the year and is celebrated in families by performing traditional activities together in their homes.
The hardwork of Organising Committee of the event was transformed into a Magnum Opus of Indian culture. They made it sure that they present a great event before the great audience with the benchmarking performances. 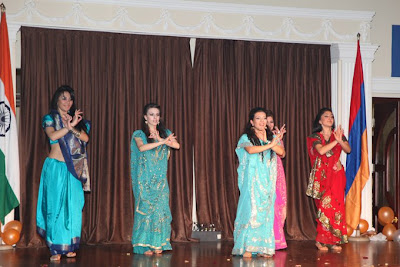 Highlights of the program were cultural performances by Indian and Armenian students together, Indian-Armenian cultural performances, Indian Cuisine and open dance floor party. There was a great participation from Armenian students also performing on Indian music tunes. These Armenian participants performed Bhangra and some Bollywood dance numbers like very famous “Dola Re Dola” from Bollywood movie DEVDAS. Special sari show was performed by Armenian Girl Students studying Hindi at Yerevan State Linguistic University after V.Bryusov. The honorable ambassador of India to Armenia Mr. Achal Kumar Malhotra graced this event as CHIEF GUEST. Special guest of the event was the Vice Rector and Dean of Yerevan State Medical University.
The event was supported by the facebook based group “India-Armenia Friendship”. The group was founded over 1 year ago by Mr. Rananjay Anand from India with a vision to start a new chapter in the bilateral relationship of India and Armenia with a clear intention of creating PEOPLE2PEOPLE connection between the two countries. The Chief Guest Mr. Malhotra when went on stage, he greeted audiences very warmly in different languages like Armenian, Russian, Hindi, English, Malyalam, Punjabi etc. In his speech the honorable ambassador of India to Armenia Mr. Achal Kumar Malhotra encouraged both the Armenian and Indian youth to join this group together and make this happen perfectly.
The Co-founder of the group Ms Ruzanna Ashughyan briefed the guests about the aims of the group: “This is a non-political and non-profit platform to strengthen India-Armenia Relationship. We envisaged a benchmarked relationship, to make it more serious and deep dived one. We appeal to all those people to join this group, who want to see these two great countries together, who are passionate about both of these countries and want to contribute their own bit in the mutual relationship”.
On behalf of the Founder Mr. Rananjay Anand, Ms. Ruzanna also shared an important message with the audience that in the near future an official platform called India-Armenia Foundation (IAF) is being launched which is currently under finalization process. The vision of the organization is to act as the connecting “BRIDGE” between India and Armenia to promote people to people connection, strengthen cultural, socio-economic ties, trade engagement and also in long term developing environmental guidance through sustainable development programs.
The event concluded with Indian cuisine and dance party.

Photos by Mr GAGIK BUNIATYAN
Posted by IAF at 05:05 No comments: